GA Effect is a webapp that uses Bayesian structural time-series to judge if events happening in your Google Analytics account are statistically significant.  Its been well received on Twitter and how to use it is detailed in this guest post on Online Behaviour, but this blog will be about how to build your own or similar.

Update 18th March: I've made a package that holds a lot of the functions below, shinyga.  That may be easiest to work with. 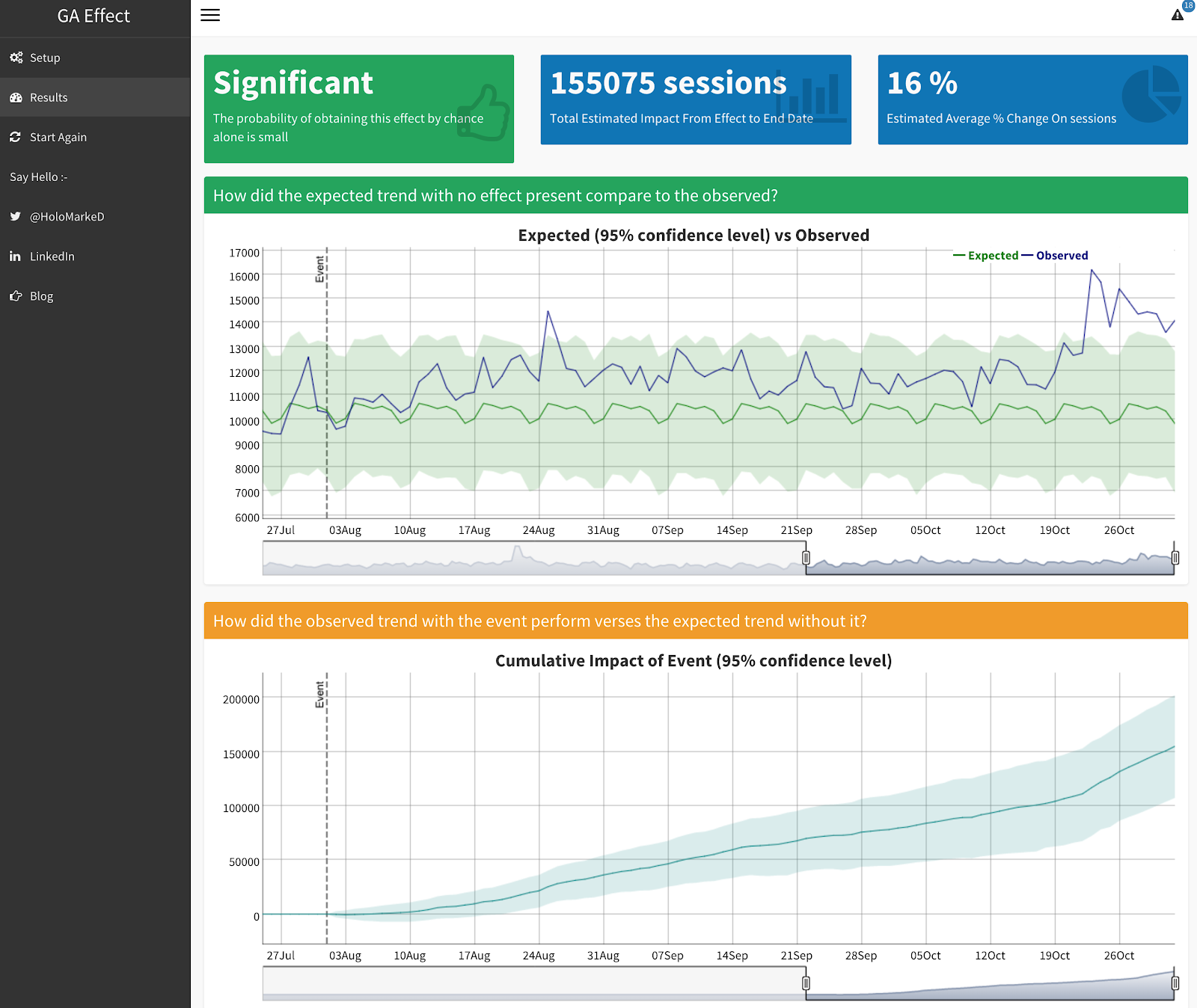 What R can do

Now is a golden time for the R community, as it gains popularity outside of its traditional academic background and hits business.  Microsoft has recently bought Revolution Analytics, an enterprise solution of R so we can expect a lot more integration with them soon, such as the machine learning in their Azure platform.

Meanwhile RStudio are releasing more and more packages that make it quicker and easier to create interactive graphics, with tools for connecting and reshaping data and then plotting using attractive JavaScript visualisation libraries or native interactive R plots.  GA Effect is also being hosted using ShinyApps.io, an R server solution that enables you to publish straight from your console, or you can run your own server using Shiny Server.

For the GA Effect app, the key components were these R packages:

First off, using RStudio makes this all a lot easier as they have a lot of integration with their products.

ShinyDashboard is a custom theme of the more general Shiny.  As detailed in the getting started guide, creating a blank webpage dashboard with shinydashboard take 8 lines of R code.  You can test or run everything locally first before publishing to the web via the “Publish” button at the top.

Probably the most difficult concept to get around is the reactive programming functions in a Shiny app.  This is effectively how the interaction occurs, and sets up live relationships between inputs from your UX script (always called ui.R) and outputs from your server side scripts (called server.r).  These are your effective front-end and back-end in a traditional web environment.  The Shiny packages takes your R code and changes it into HTML5 and JavaScript. You can also import JavaScript of your own if you need it to cover what Shiny can’t.

The Shiny code then creates the UI for the app, and creates reactive versions of the datatables needed for the plots.

The Google authentication flow uses OAuth2 and could be used for any Google API in the console, such as BigQuery, Gmail, Google Drive etc.  I include the code used for the authentication dance below so you can use it in your own apps:

Once a user has authenticated with Google, the user token is then passed to rga() to fetch the GA data, according to which metric and segment the user has selected.

This is done reactively, so each time you update the options a new data fetch to the API is made.  Shiny apps are on a per user basis and work in RAM, so the data is forgotten once the app closes down.

You can now manipulate the data however you wish.  I put it through the CausalImpact package as that was the application goal, but you have a wealth of other R packages that could be used such as machine learning, text analysis, and all the other statistical packages available in the R universe.  It really is only limited by your imagination.

Here is a link to the CausalImpact paper, if you really want to get in-depth with the methods used.  It includes some nice examples of predicting the impact of search campaign clicks.

Here is how CausalImpact was implemented as a function in GA Effect:

dygraphs() is an R package that takes R input and outputs the JavaScript needed to display it in your browser, and as its made by RStudio they also made it compatible with Shiny.  It is an application of HTMLwidgets, which lets you take any JavaScript library and make it compatible with R code.  Here is an example of how the main result graph was generated:

I’ve been testing the alpha of shinyapps.io for a year now, but it is just this month (Feb 2015) coming out of beta.  If you have an account, then publishing your app is as simple as pushing “Publish” button above your script, where it appears at a public URL.  With other paid plans, you can limit access to authenticated users only.

This app only took me 3 days with my baby daughter on my lap during a sick weekend, so I’m sure you can come up with similar given time and experience.  The components are all there now to make some seriously great apps for analytics.  If you make something do please let me know!